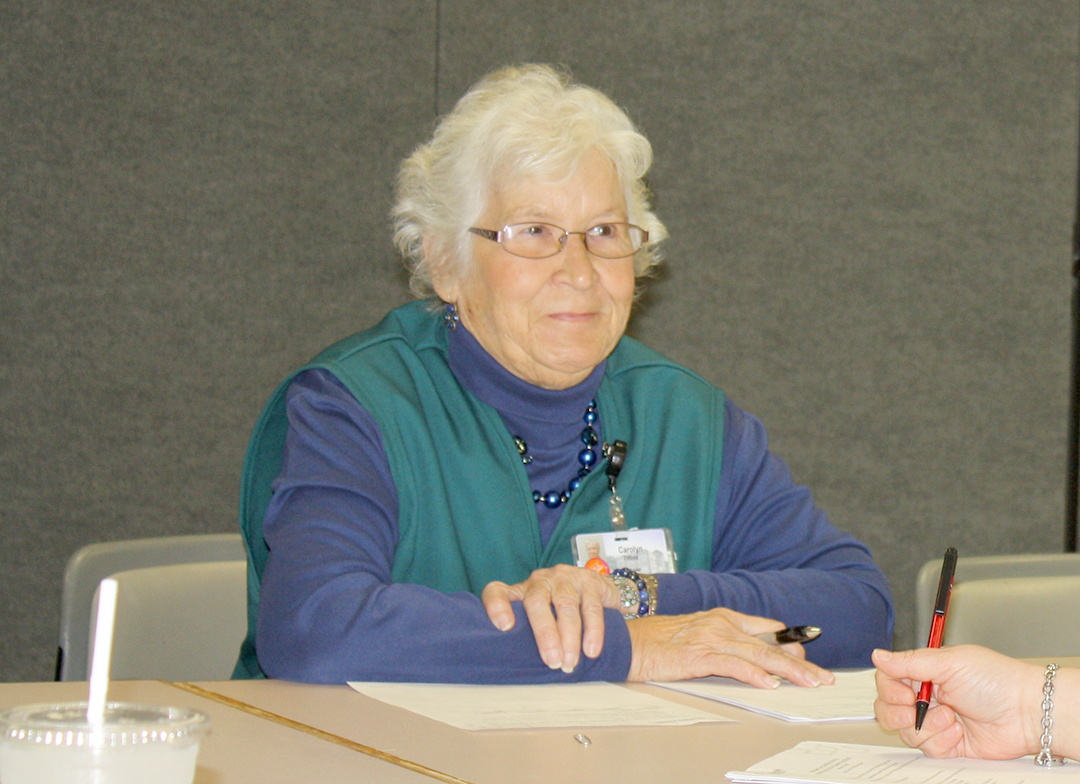 Carolyn Tilford is the 2019 president of the Phelps Health Auxiliary Board of Directors.

Carolyn Tilford was employed as a nurse for decades, caring for others. In fact, she received a Golden Certificate from the Missouri State Board of Nursing for being licensed as a Registered Nurse in the state for 50 years.

During her last 13 years as a nurse, she worked at Phelps County Regional Medical Center (PCRMC) – now called Phelps Health.

"I spent most of my nursing career here (at Phelps Health)," Tilford said. She said the healthcare organization gave her so much throughout her career that she wanted the opportunity to give back.

She previously served on the board as first vice president for two years. She also was the board’s historian for two years. As historian, Tilford chronicled all of the Auxiliary’s events and projects throughout the years.

Born and raised in a town southeast of Rolla called Norman that is no longer on current maps, Tilford has lived and worked in the Phelps County area for most of her life.

In addition to Phelps Health, Tilford worked at the Phelps County Health Department, where she met Tina Pridgeon, former director of the Phelps Health Auxiliary. Together, they worked on several projects together, and Tilford learned more about the Auxiliary through Pridgeon.

Tilford worked for Phelps Health three different times during her career. In the early 1970s, Tilford worked on staff when the Intensive Care Unit (ICU) first opened at the Rolla hospital. "It was a three-bed unit," she recalled.

She worked as an orthopedics nurse in Springfield but later came back to Rolla and was employed as a nurse in the Emergency Department at Phelps Health. From 1979-80, she was the emergency room nurse supervisor.

Tilford later moved into the role of working as a community health educator for the organization. Tilford also was involved in forming the Silver Eagles program, which promotes healthy aging for those aged 50 and above.

The Rewards of Volunteering

As a volunteer, Tilford has usually filled in, as needed, at various places around the healthcare organization, but she hopes to be helping around the North Entrance of the hospital this year.

When asked what her favorite part about volunteering is, she replied, "Being with the other volunteers and helping people."

Tilford enjoys volunteering at Phelps Health and encourages others who are considering volunteering to do so. "You get more out of volunteering than what you give," she said. "The rewards you get from volunteering…you can’t measure them."

The Auxiliary has given back to the healthcare organization in so many ways, but the one project that stands out to Tilford during her time as a Phelps Health volunteer was when the Auxiliary donated $220,000 for a new ambulance last year.

Former Auxiliary board president Jayne Stites championed this project, and Tilford said the outpouring of support by Auxiliary members for this donation was incredible.

Tilford is a member of Rolla’s Immanuel Lutheran Church, where she volunteers with the servant program and sings in the choir.

In addition, she is a member of the Noah Coleman Chapter of the Daughters of the American Revolution (DAR). She also has been a member of historical societies in Pennsylvania and Virginia as well as cemetery preservation efforts in St. Joseph, Missouri.

Tilford has two children and nine grandchildren, whom she enjoys spending time with. Her hobbies include quilting, embroidery, playing canasta and cribbage, reading mystery and history books as well as gardening.

Want to learn more about the Phelps Health Auxiliary and Volunteer Services? Interested in becoming a volunteer with the Auxiliary? Learn more by clicking here.