Think You Are Allergic to Penicillin? Get Tested. 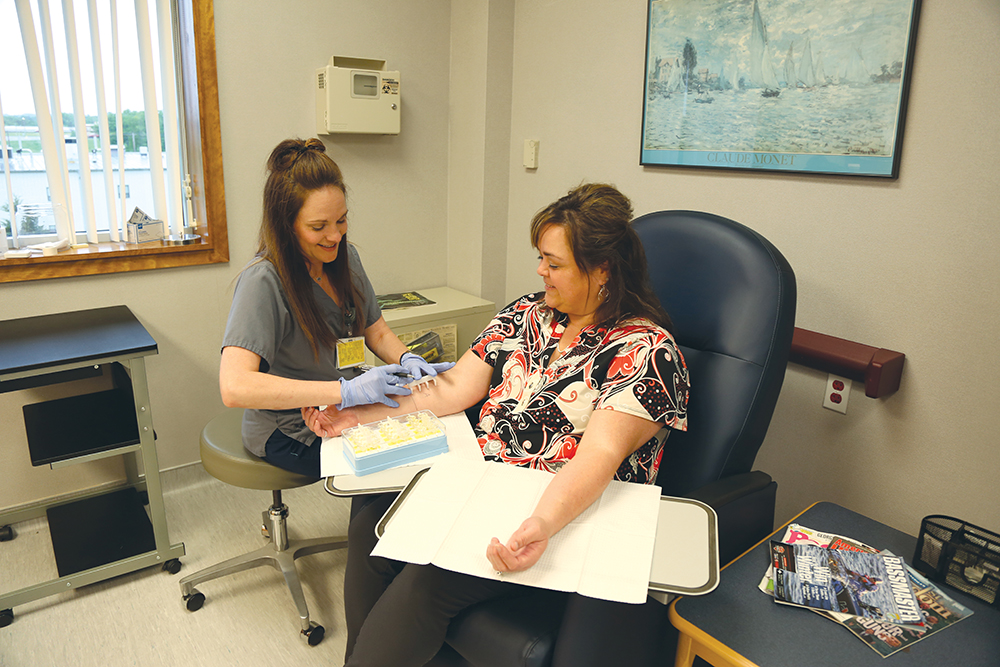 April Veo, RN, left, tests a patient for a penicillin allergy at the Phelps Health Medical Group at 600 Blues Lake Parkway in Rolla.

You might have been told years ago that you are allergic to penicillin, a common antibiotic used to treat bacterial infections. However, you may not have a penicillin allergy.

Phelps Health’s allergy care team is recommending patients who list penicillin as one of their allergies be tested.

“Most people say they are allergic to penicillin or were told they have an allergy to penicillin, but they actually do not,” said April Veo, a Registered Nurse (RN) who cares for allergy patients at the Phelps Health Medical Group at 600 Blues Lake Parkway in Rolla.

While some people truly are allergic to penicillin and have suffered a serious, life-threatening allergic reaction (or anaphylaxis) caused by penicillin, others have reported getting a rash or other symptoms after taking the antibiotic.

Individuals who believe they are allergic to penicillin may have been misdiagnosed in the past or their symptoms may not have been caused by penicillin, Veo said. In some cases, patients also can outgrow allergies.

Patients who are older than age 10 or who have not had life-threatening allergic reactions to penicillin in the last 10 years can be tested. The process involves a series of skin and oral tests that take about an hour and a half to two hours to complete, Veo said.

First, patients will be tested on their forearm. After 15 minutes, Phelps Health staff will check to see if a reaction occurs. If patients test positive to a penicillin allergy, no further tests will be performed.

However, if the first test is negative, then patients will receive an injection in their upper arm. After another 15 minutes, if no reaction occurs, patients will be given an oral dose of penicillin and observed.

If no reaction occurs after more than one hour from the oral medicine, patients can have a Phelps Health ear, nose and throat (ENT) and allergy specialist sign off on documentation that states they are not allergic to penicillin.

“We will put it in your medical records, but patients also can receive copies to give to their primary care provider, their dentist or other specialist,” Veo said. Cancer patients who were told they have a penicillin allergy may benefit from being tested, too.

“Penicillin is a safe, inexpensive drug and is readily available,” Veo said. “If you’re not really allergic to penicillin, that means you also can use a variety of other medicines that have penicillin in them.”

This test is covered by most insurance plans, as well as Medicare and Medicaid, Veo said, but patients should check with their insurance company.

Talk to your primary care provider first if you would like to be tested for a penicillin allergy.