How a Small Battery Caused a Big Problem 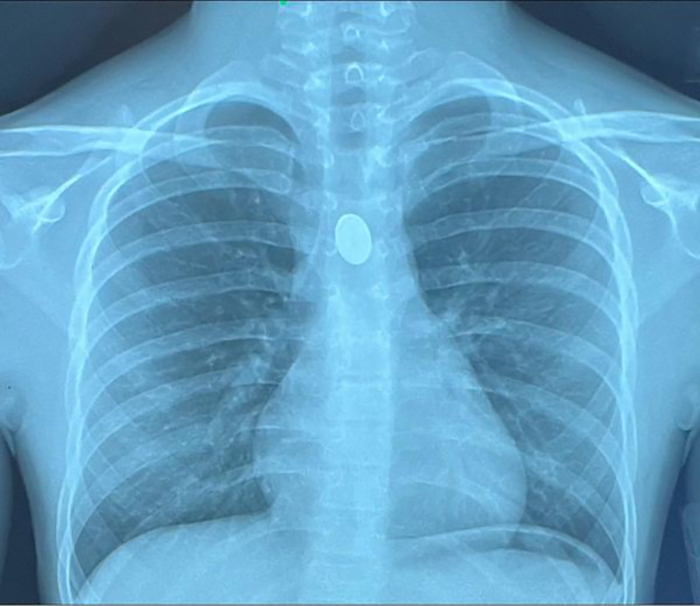 Jason and Laurie Corey credit Phelps Health with saving their daughter's life after she accidentally swallowed a button battery.

One evening in February, as Laurie and Jason Corey were getting ready for bed, their teenage daughter, Callie, came to them crying after she accidentally swallowed a battery from an LED remote.

“She was panicked,” Laurie said. “We immediately knew that something was wrong because she was in tears.”

Jason, a nurse anesthetist at Phelps Health, said he has previously taken care of patients who have swallowed button batteries like the one Callie ingested.

“I knew it was a pretty urgent thing to get taken care of,” Jason said, so he called Dana Voight, MD, a Phelps Health general surgeon.

“He [Dr. Voight] said get to the hospital, and so we packed up Callie and raced [to Phelps Health],” Jason recalled.

On the way to the emergency department, Callie was complaining of severe chest pain, said Laurie, who also works at Phelps Health as a nursing educator.

“The closer that we got to the ER, the more severe the chest pain got. There wasn’t really anything that we could do to make the chest pain better, so we felt somewhat helpless,” Laurie said.

After the Corey family arrived at the Phelps Health Emergency Department in Rolla, Missouri, they were taken to an exam room, and Callie began having spasms in her esophagus.

Laurie recalled one of the ER nurses, whom she described as extremely caring. “You could tell that she [the nurse] had compassion for what we were going through,” Laurie said.

While Callie was in the emergency room at Phelps Health, Laurie said the staff made her daughter feel comfortable.

“[Phelps Health staff] let Callie know that it was going to be OK and reassured her that they were going to get that battery out,” Laurie said. “That was the one thing that we both noticed was how much they addressed her and tried to comfort her.”

Getting the battery out would be the only thing that would relieve Callie’s pain and make her feel better, Laurie said.

Dr. Voight met with Callie and her parents prior to the X-ray results to update them on the endoscopy process and offer comfort to Callie. The X-ray confirmed exactly where the battery was lodged, in the esophagus right at the point of the heart’s aorta.

“We really felt comfortable knowing that Dr. Voight and the endoscopy team were with Callie and knew exactly how emergent it was to get this [battery] out,” Laurie said.

Jason also complimented the anesthesia staff, who recognized this urgent condition that needed to be treated. They, along with the endoscopy team, did an excellent job preparing Callie for an emergency endoscopy (a procedure that looks at a person’s upper digestive system).

“Pretty much everybody who we ran into, at that point, was very speedy, knowledgeable and comforting,” Jason said.

Once Callie’s endoscopy began, “we went to the waiting room for [what seemed to be] the longest 15 to 20 minutes of our lives,” Jason said.

After the procedure, Dr. Voight met with Jason and Laurie and told them he was able to quickly and successfully remove the battery, but that Callie had suffered burns and damage to her esophagus due to the battery.

According to the American Academy of Pediatrics, button batteries can cause severe tissue burns in as little as two hours and cause lifelong injuries.

Because of these burns, Callie was transferred to St. Louis Children’s Hospital, where she was given a feeding tube and placed on a liquid diet for several weeks. Laurie said her daughter was a real trooper throughout the whole recovery.

After about five weeks, the feeding tube was removed, and Callie began eating soft foods. She has since resumed her normal diet.

Following her care in St. Louis, Callie returned to Phelps Health for follow-up appointments in the Pediatrics Clinic and more medical imaging tests to see how her esophagus was healing. “She had repeat CAT scans [or CT, computed tomography scans], and [Phelps Health] staff made her feel very comfortable, talking to her through the whole thing,” Laurie recalled.

“She’s back to her old self,” Jason said. “It’s just really wonderful.”

Laurie added that Callie has returned to normal activities, like helping on the farm, jumping on the trampoline and swimming. “It’s all because of her coming to tell us in time,” Laurie said.

Jason and Laurie shared their story on social media as a public service announcement. The couple said they were overwhelmed by the support from the community, school and Phelps Health.

“I truly feel that living in this small town with this fantastic hospital saved our kid’s life,” Jason said about Phelps Health.

“Had we not gotten that battery out in the timely fashion that we did, it could have burned through the esophagus,” Laurie said. “I can’t say enough about the entire team [at Phelps Health,] from start to finish.”

Call 911 or go to the nearest emergency department if you have a life-threatening and serious medical concern. Learn more about emergency care at Phelps Health.