Is It a Mole, Freckle or Sunspot? How to Tell the Difference 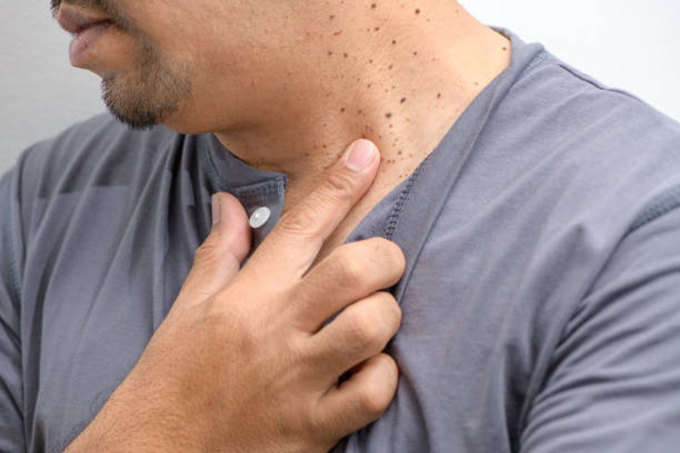 Moles, freckles and sunspots are usually no cause for concern, but some dark spots can be signs of skin cancer.

Do you have a dark spot on your face or arms? It’s quite common. Many people have discoloration on their skin, but how do you know if that spot on your skin is a mole, freckle or sunspot (also called age spot or liver spot)?

Most often, moles, freckles and sunspots are no cause for concern, according to Matthew Hurley, MD, a family medicine physician with the Phelps Health Medical Group. However, some dark spots can be signs of skin cancer. So, how can you tell the difference?

Moles are caused by cells in your skin called melanocytes (melanin-producing cells) that grow together in clusters.

Most people have about 10 to 40 moles, which can be found anywhere on their bodies, but some individuals can have more or less, Dr. Hurley said. Moles are usually raised and can range from fleshed-colored to dark brown.

You can be born with moles, or they can develop over your lifetime.

Freckles and sunspots are usually found on areas of your skin that have been exposed to the sun, especially your face, hands and arms.

Freckles occur when too much melanin (the natural pigment that gives skin its color) is produced. People usually develop freckles based on their genetics, Dr. Hurley said.

Freckles are flat, small and are normally found together in groups. They appear at a young age and typically fade as people get older.

Sunspots, which are closely related to freckles, also develop when your skin makes too much melanin. Typically, sunspots appear as a single spot and are larger than freckles. These spots are caused by sun exposure and usually develop later in life, according to Dr. Hurley.

If you have a family history of skin cancer, you should have your skin checked for moles yearly, especially after age 35.

Are Moles, Freckles and Sunspots Cancerous?

To tell if your mole, or moles, may be cancerous, Dr. Hurley recommends you remember the ABCs of skin cancer.

Freckles and sunspots are not cancerous, but Dr. Hurley said that in some cases, cancerous moles can often look similar to a sunspot early on. He suggested closely watching any new skin lesions or spots you develop.

How Can I Avoid Moles?

Since sun exposure can lead to moles, Dr. Hurley suggests that you avoid spending too much time in the sun. When out in the sun, make sure you apply sunscreen to exposed areas of your skin every two hours.

Dr. Hurley said wearing sunscreen on your face, even if you don’t plan to be in the sun too long, is important. Also, wear wide-brimmed hats to protect your head and face from the sun.

In addition to sun exposure, Dr. Hurley said that tanning beds, tobacco and exposure to other substances known to cause cancer can lead to skin cancer. He recommends you avoid these things.

If you are concerned about any new mole or moles that have changed, talk to your doctor or dermatologist. Primary care providers (PCPs) can check for moles during your yearly physical or at any appointment. Make an appointment today with your PCP by logging into MyChart.