Rolla Man Back on Course After Heart Attack 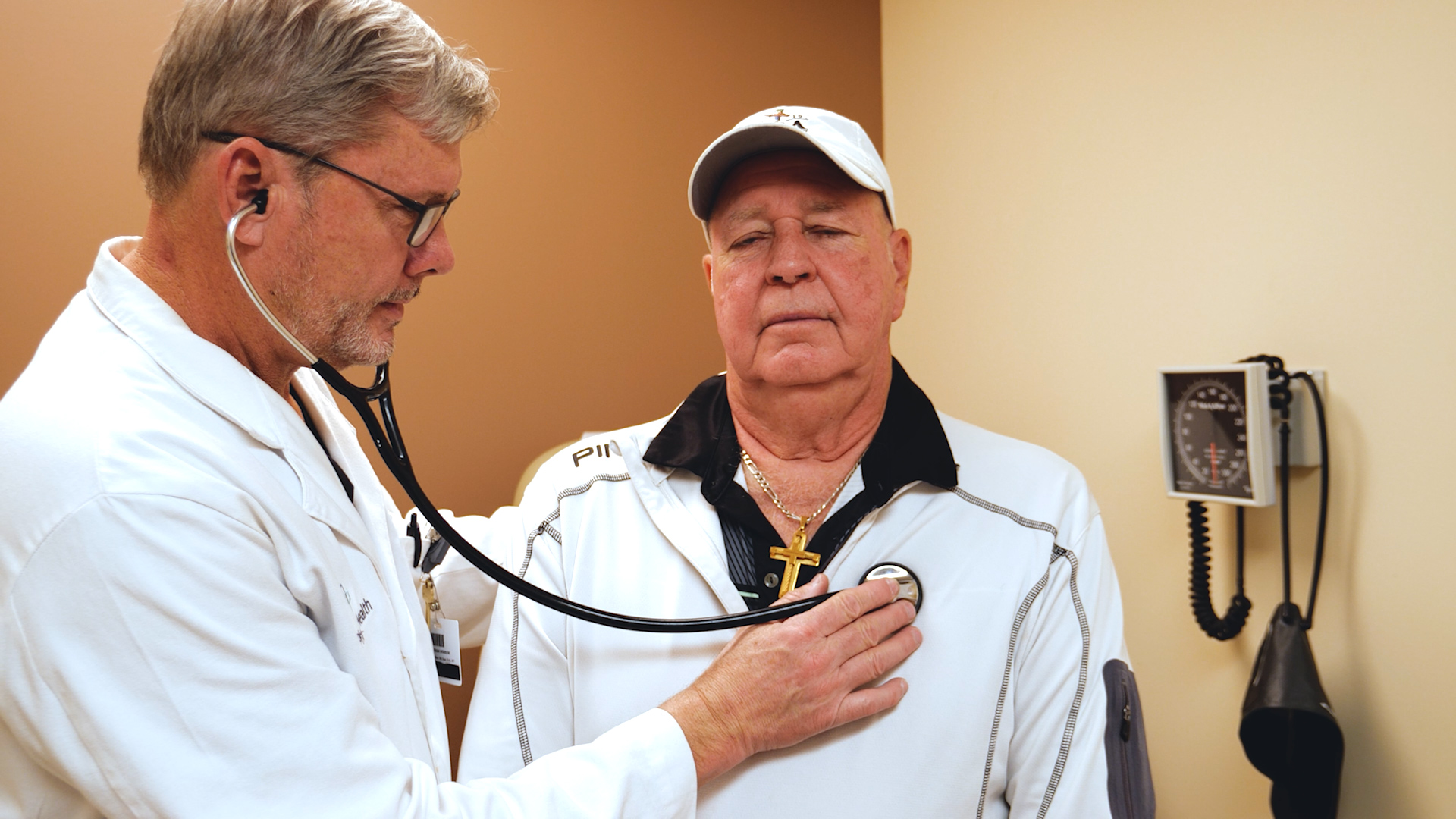 Chet Saladin remembers one day he was playing golf when he suffered a heart attack.

“I was on the 16th green…and I started not feeling very good,” said Chet, a 77-year-old avid golfer who lives in Rolla.

When he didn’t think he could finish the game, Chet told his fellow golfing buddies that he was going back to his house nearby.

One of the golf course superintendents, who happened to be on his way to see Chet, found him in his driveway, about halfway to the front door.

“I went down, and he was there to catch me,” Chet said. “He said that I passed out for a while.”

When Chet woke up, he figured he had heat exhaustion because it was about 100 degrees F that day. The golf course superintendent carried Chet to his house, where he cooled down and started feeling better.

Chet called his son, Chad, who came over. His son was looking up symptoms of heart attacks, which include chest pain, lightheadedness, jaw pain, shortness of breath and arm pain. Chet said he was feeling discomfort in his arm.

While Chet initially didn’t want his son to call 911, when the two walked to the car, Chet fell again in his driveway. For a moment, Chad thought he had lost his dad.

“He's holding my head in his lap,” Chet said of his son. “He said he thought that I had passed on. He was beside himself, with tears streaming down his face.”

After Chet assured Chad he would be OK, Chad quickly called for an ambulance.

Chet’s wife, Donna, was in Iowa when she heard the alarming news.

“She threw some clothes in her vehicle and was on the road before the ambulance was ever called,” Chet said. When some truckers saw her, they kindly pulled together and escorted Donna back to Rolla, so she could be with her husband.

Before his heart attack, the only other heart condition Chet had was arrhythmia (an irregular beating of the heart). Phelps Health Cardiologist Tim Martin, MD, FACC, previously put a pacemaker in Chet for the arrhythmia.

When Chet was looking for heart care, going to Phelps Health just made sense.

“I never thought of going any place else,” he said.

Besides Chet’s father, who had a stroke, Chet said he has no family history of heart disease.

Chet fondly remembers the EMS crews who put him on a stretcher and into the ambulance.

“The young man who rode with me in the ambulance talked to me the whole time, checked me out and said, ‘Yes, you're 100% having a heart attack,’” Chet said.

Later, he learned that one of his arteries – the biggest in his heart known as the left anterior descending (LAD) artery, or “widow maker” – was 99% blocked.

“Somebody…I like to think our Heavenly Father, was right there with me through the whole thing,” Chet said.

Chet was taken to the Phelps Health Emergency Department, a place he said he has been several times.

“They've always been great, and they've always taken care of my problems, so I would certainly recommend them,” he said.

“Everything was super smooth, and everybody…knew what they were doing,” Chet said. In addition to Dr. Virk, he said Dr. Martin also was by his side the whole time.

After the stent procedure, Chet was released from the hospital the day after and later went to cardiac rehabilitation at Phelps Health. He complimented the cardiac rehab staff’s bedside manner and professionalism.

“If you want some TLC, tender loving care, I suggest you go to [cardiac] rehab [at Phelps Health] because they can give it to you,” he said.

Since then, he has had no other issues with his heart. Chet said he can do everything he was doing before his heart attack.

“I try to play [golf] every morning with a group of good guys. We call [ourselves] the ORFs, old retired fellas,” he said.

Chet said he would recommend the Phelps Health Heart and Vascular Center for heart care.

“It's a wonderful facility that we are very fortunate to have in our community,” he said, adding that the doctors, nurses and staff are knowledgeable and wonderful.

“After you've seen them awhile, they cease to be your doctor,” Chet said. “They become a friend.”

Take Care of Your Heart

From an irregular heartbeat to blocked arteries, Phelps Health cardiologists are here to keep your heart healthy. Find a heart care specialist today.