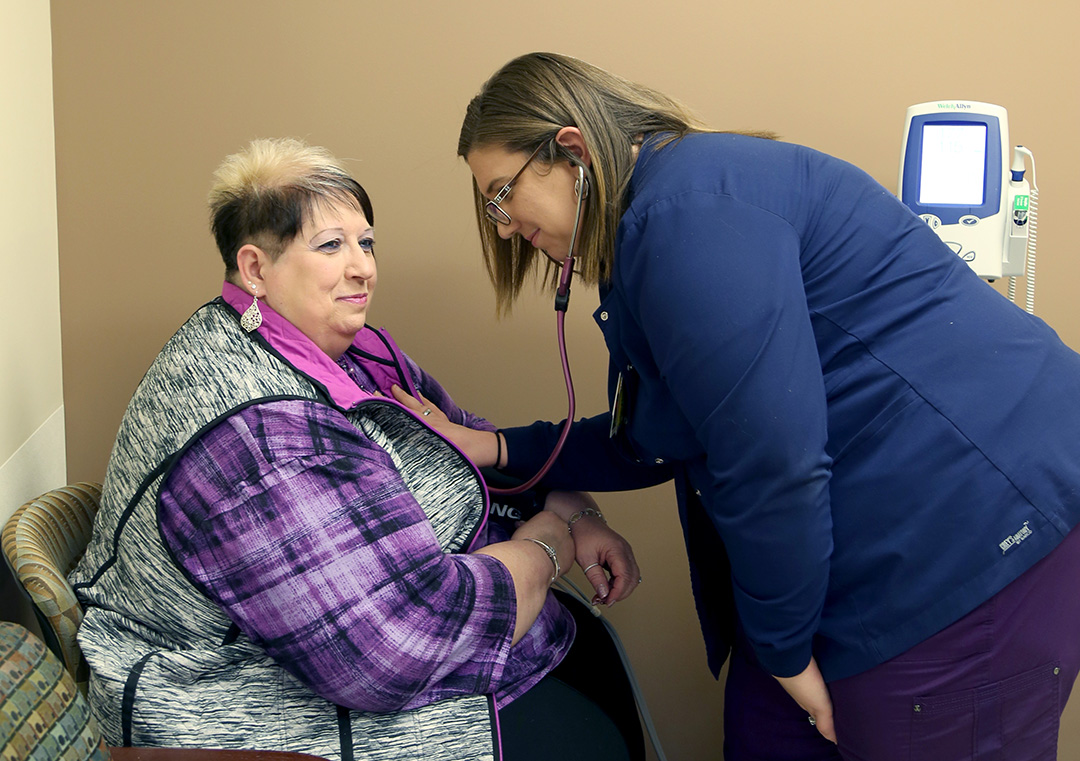 Seven years ago, Lona Phillips was letting her dog outside when she began sweating. The 61-year-old Salem, MO, woman was unsure what was wrong.

However, her symptoms started getting worse to the point where she nearly passed out, could not get out of a recliner and began feeling confused. That was when she called her heart doctors – Phelps Health cardiologists Tim Martin, MD, and his father, Tom Martin, MD, who is now retired.

“I told them that something wasn’t right,” Phillips recalled, and she ended up going to the Phelps Health Emergency Department in Rolla, MO.

A CT (computed tomography) scan revealed that Phillips had blood clots in her left leg that had traveled to her heart and lungs, affecting blood flow. She was placed on life support.

After having surgery in St. Louis, MO, where she had an inferior vena cava (IVC) filter placed to stop blood clots from traveling to her heart and lungs, she was transferred back to Phelps Health in Rolla, MO, for follow-up care with Dr. Tim Martin.

Blood clots can be beneficial when they form after an injury to stop bleeding, Ballard said. However, some blood clots develop inside a person’s veins without a good reason and do not dissolve naturally. Sometimes these clots can travel to other parts of the body and cause harm, he said.

To reduce the risks of getting blood clots, Ballard recommends not sitting for long periods of time and drinking plenty of fluids since dehydration can contribute to the development of blood clots. “After surgery, or if you have been on bed rest, the sooner you get up and move around, the better,” he added.

While Phillips is unsure what caused her blood clots, she has not had any recently. She has, however, had a pacemaker placed and had the battery of the pacemaker changed in late July of 2019. Phillips also is taking medicine to help her heart stay in rhythm.

Before the blood clots seven years ago, Phillips said she never experienced any heart problems, but many of her relatives – on both her mom and dad’s side of the family -- had or currently have issues with their heart and cardiovascular systems.

“My mom had a pacemaker, and I have two brothers and a sister with heart problems,” she said. Her husband, Kenneth, also developed a small blockage in his veins.

Despite her health problems, Phillips said she is pleased with the care she has received at Phelps Health.

“The doctors, the nurses…they’re all good,” she said. “They have bent over backwards for me.”

Phillips noted that she and her family have been going to Phelps Health for about 50 years. She has always recalled having positive experiences, not only with the Phelps Health Heart and Vascular Center but also with other departments.

“They have treated me well, and I get good care,” she said.