After Accident, Patient on the Mend Thanks to Phelps Health Wound Center 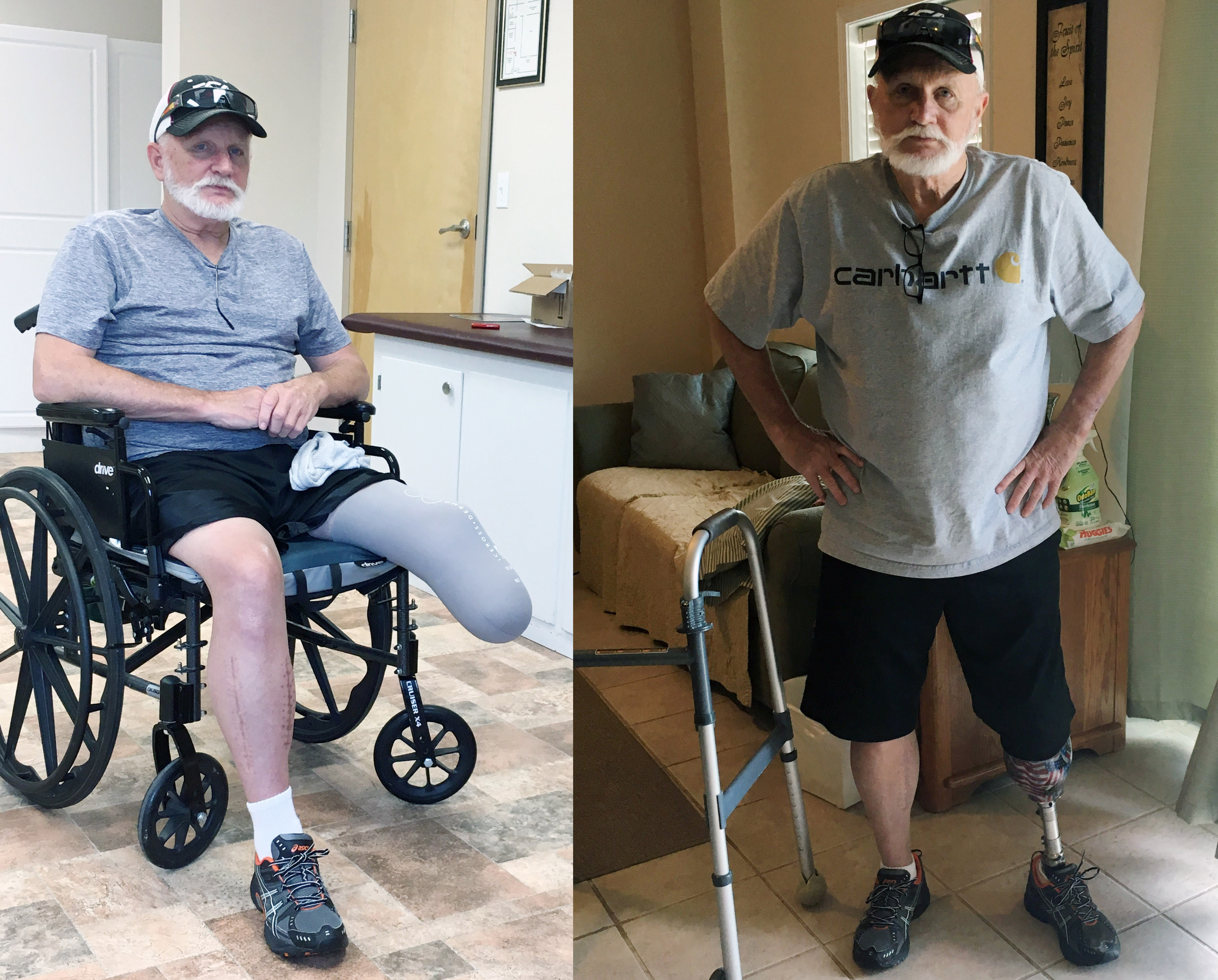 After an accident, Jason Z. Brown said the Phelps Health Wound Center staff kept his leg in good condition so that he could get a prosthetic leg.

Back in January 2019, Jason Z. Brown’s life changed drastically. He was hit by a pickup truck while trying to remove debris from a highway.

After undergoing several surgeries, Brown, a Phelps County resident, now has a prosthetic leg, which he said was made possible thanks to the excellent care he received at Phelps Health.

“I’ve been impressed with it all,” Brown said of his experience at Phelps Health, from on-time appointments to friendly and knowledgeable employees.

After the pickup struck Brown’s left leg, he used his belt as a tourniquet to apply pressure to the limb. Phelps Air transported him to a hospital in the St. Louis area.

Brown’s left leg was broken in two places, and he needed blood transfusions in addition to surgery to try to save his leg.

After a month, he was released from the hospital and was referred to the Phelps Health Wound Center in Rolla, which offers wound care services to patients with chronic or non-healing wounds. There, he met Candy Sadler, an adult geriatric nurse practitioner (AGNP) who specializes in wound care.

After an evaluation by Sadler and her staff, Brown said his care team knew what needed to be done and developed a treatment plan.

“I was going to the Wound Center about two to three times a week, for about four to five months,” Brown said. “They [Phelps Health care staff] really excel at their jobs. They taught my wife and me how to keep everything clean and provided all of the materials we needed at home to dress my leg and take care of it.”

However, after several months, an X-ray revealed that the bones in his leg were not healing, despite good blood circulation.

“The surgeon wanted to cut the leg off below the knee, and he [surgeon] had to have about five to six inches below the knee to put on a prosthetic leg,” Brown said. “The staff at Phelps Health kept the leg in good condition so that the surgeon in St. Louis could have enough skin and bone to do the surgery.”

After the lower half of his left leg was removed, Brown was fitted for a prosthetic leg in the fall of 2019. He has since been undergoing physical therapy and rehabilitation as he adjusts to his new left leg.

Brown has been working with his primary care doctor, Rachelle Gorrell, DO, a family medicine physician, and Dawn Myers, DO, MPT, a doctor who specializes in physical medicine and rehabilitation, as he recovers. Dr. Gorrell and Dr. Myers are both physicians with the Phelps Health Medical Group.

Brown set a goal for himself to drive again and was able to do so after two months with his new prosthetic leg.

A former volunteer chaplain at Phelps Health, Brown will turn 64 soon and is continuing his road to recovery. Lately, he has been making a lot of progress.

“I’ve been doing well,” he said. “I ran a little bit the other day. I was even able to preach, which involves me standing for about two to three hours and not using a crutch.”

Throughout this experience, Brown has been appreciative of the doctors, nurses and care staff, noting they have kept him and his wife well-informed.

“I’d definitely recommend Phelps Health due to my experience,” Brown said. “They have been attentive, and I want to give them praise. They all have done a good job.”

Phelps Health has knowledgeable specialists who can help find the right treatment options for chronic wounds or injuries. The care team at Phelps Health’s Wound Center are trained to treat injuries, illnesses and disabilities and are experts in designing comprehensive, patient-centered care plans.