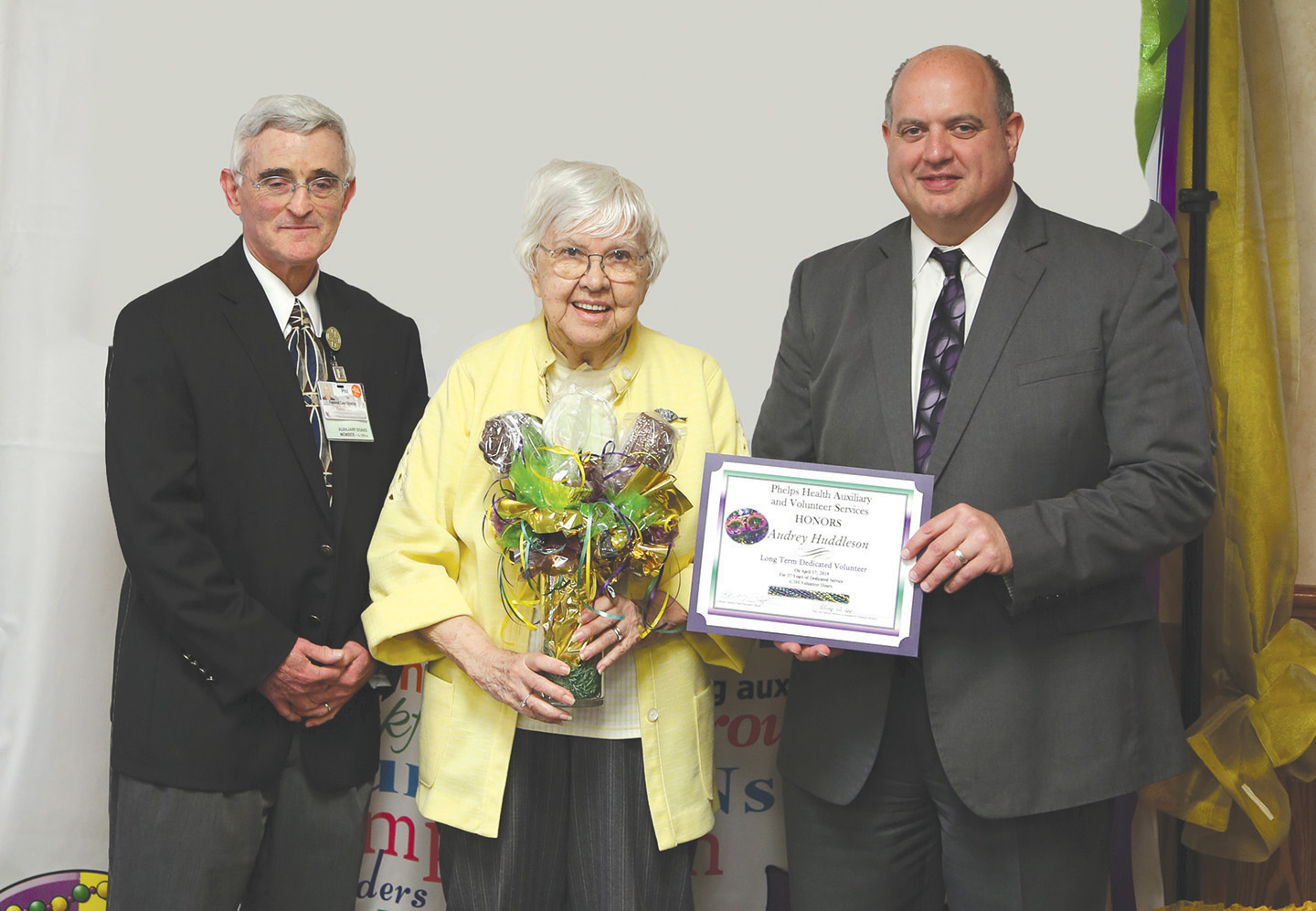 Audrey Huddleson, center, was honored for her 37 years of service with the Phelps Health Auxiliary and Volunteer Services.

Phil Cox, PhD, interim director of the Phelps Health Auxiliary and Volunteer Services, perfectly summed up the reason volunteers do not receive paychecks for their time.

"I read somewhere that volunteers aren’t paid…not because they are worthless, but because they are priceless," Cox said during the annual Auxiliary Appreciation Luncheon held April 17, 2019, at the Lions Club Den in Rolla, Missouri.

Each year, the Auxiliary honors all of its volunteers for their years of service to the Phelps Health organization. From sewing and knitting baby caps, bags and stuffed animals to helping patients and visitors find their way around the healthcare facilities and so much more, volunteers are vital to the success of Phelps Health.

"Our staff could not do what we do without you," Phelps Health President and CEO Ed Clayton told volunteers at the spring luncheon.

While all volunteers were thanked for their service, about 10 volunteers received a special honor for volunteering for more than 20 years.

Audrey Huddleson is currently the longest serving volunteer. She has been with the Auxiliary for 37 years. Huddleson volunteers every Tuesday morning in the Phelps Health Medical Office Building, "and I love doing that," she said.

"Volunteering makes me feel good," Huddleson said. She noted that she has had six cancers in her lifetime, so as a volunteer at Phelps Health, she feels like she is giving back.

Other longtime volunteers recognized include the following:

Marsh said volunteering is fulfilling and that she enjoys being around other people. She currently volunteers in the Repeat Boutique and at the North Entrance.

Overby, like Marsh, volunteers in the Repeat Boutique. After retiring, "I thought that I’d like to do something and give back to my community," she said. A friend of hers, who was Auxiliary board president at the time, encouraged her to volunteer. "I just feel this is the right place for me," Overby said.

Auxiliary volunteers provided a total of 18,704 service hours in 2018. That includes hours from both adult and teen programs. (The Auxiliary hosts a VolunTEEN program each summer for teenagers.)

Clayton put that grand total into perspective. "If we had to hire additional employees to do the jobs that volunteers do, it would total about $450,000 in salaries each year," he said. "That is how much volunteers contribute to this organization."

Not only do volunteers give back their time but also the Auxiliary has contributed funds for several projects for the health system.

Last year, one of the biggest contributions announced was the donation of $220,000 to Phelps Health for the purchase of a new ambulance. Additionally, the Auxiliary awarded $14,000 in scholarships to area nursing and allied health students.

Another $14,000 was donated in 2018 to purchase meals for patients receiving treatments over the lunch hour at the Phelps Health Delbert Day Cancer Institute.

The Happy Hauler also received a donation of $25,000 from the Auxiliary.

The Auxiliary annually supports the Camp Capable program through The Community Partnership that helps children with disabilities or developmental delays participate in sports and fitness activities. Last year, the Auxiliary donated $5,000 to Camp Capable.

Altogether, the Auxiliary gave approximately $278,000 last year, and they are not done giving back.

In 2019, the Auxiliary has donated nearly $600 for aprons and about $6,900 for five new wheelchairs for patients to use. About $1,600 has been donated toward the VolunTEEN program. The Auxiliary also plans to provide funds for Camp Capable again this year, award scholarships and donate to other projects.

Also during the luncheon, former director Tina Pridgeon was acknowledged for her 13-plus years of service to the Auxiliary. Pridgeon retired from her position earlier this year.