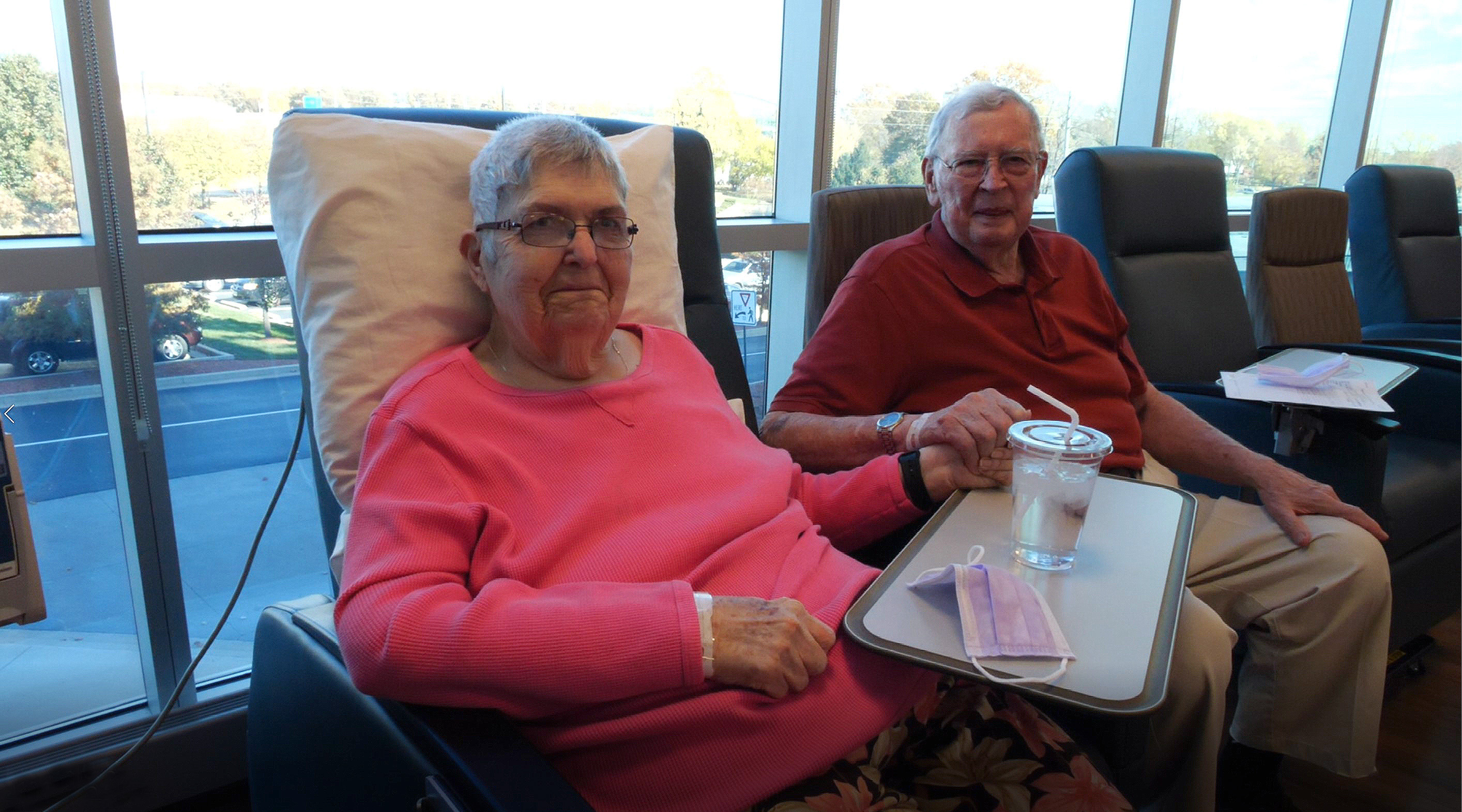 Carlene and Bob May, who have been married for 67 years, were both diagnosed and treated for different types of cancer around the same time.

Bob May first noticed there was a concern when he looked in the mirror one day and noticed his jaw was slightly swollen.

He already had a scheduled appointment with his dermatologist, and after the two discussed options, Bob went to see Brian Kriete, MD, an ear, nose and throat (ENT) specialist with the Phelps Health Medical Group.

Bob eventually learned that he had melanoma (a type of skin cancer) in his parotid gland, a salivary gland in his jaw.

Around the same time, Bob’s wife of 67 years, Carlene, was diagnosed with rectal cancer.

“I had some rectal bleeding a little bit, and it just got worse,” she said.

The couple, who are both in their 80s, began their cancer journeys together. They found care at the Phelps Health Delbert Day Cancer Institute (DDCI) in Rolla, MO.

“Carlene and I both had our challenges,” Bob said of his wife and him being treated for cancer at the same time. “They’re different situations, different types of cancer, but we just support each other. We have a lot of friends and family who are very supportive, too.”

Bob’s treatment for melanoma first involved surgery to remove the parotid gland in his jaw. After that, he underwent radiation therapy for about five weeks, followed by immunotherapy for a couple of months.

His oncologist (doctor who specializes in cancer) was Christopher Spencer, MD, DABR, medical director of the DDCI and medical director of radiation oncology at Phelps Health. He called Dr. Spencer and the other care providers, nurses and staff “top-notch.”

“We’re so fortunate to have [Phelps Health] here, and it’s just a real blessing to have this Delbert Day Cancer Institute,” Bob said. “I can't imagine a better place.”

With the DDCI, cancer patients do not have to drive far to other healthcare facilities or cancer centers around Missouri.

Since treatments have ended, Bob said he has been able to continue doing many of the activities he enjoys, but he has had to “slow down a little bit.”

When Carlene first learned of her diagnosis of rectal cancer, she said, “I felt it was in God's hands.”

While none of her other relatives have or had rectal cancer specifically, cancer does run in her family. Both Carlene’s mother and sister had breast cancer, and both got mastectomies (surgery to remove one or both breasts).

About 35 years ago, Bob and Carlene lost their son at the age of 24 to bone marrow cancer.

To treat Carlene’s cancer, she had several rounds of radiation therapy followed by chemotherapy infusions in 2021. At the DDCI, Kan Huang, MD, PhD, medical oncologist and hematologist at the DDCI, oversaw Carlene’s care and treatment plans.

“What stands out to me is the people who work there [Phelps Health DDCI]. They are absolutely wonderful,” Carlene said.

Since both have ended their treatments, Bob and Carlene’s most recent scans have shown good news. They continue to follow up with their care teams every few months.